Short Version: This is a really beautiful game that I highly recommend you play. Unfortunately, it’s all been done before in Journey and doesn’t do enough to set itself apart. It’s still really great, but it’ll be very difficult for people to not be reductive and just call this “Journey underwater,” because that’s exactly what Abzû is.

Long Version: Have you ever read Jojo’s Bizarre Adventure? The most recent parts of that series actually take place in an alternate universe from the previous stories. Some characters share the same names or are slightly altered versions of the same person. This is what I think about when I play Abzû, because it is basically an alternate universe Journey with a little bit of Flower sprinkled around it. There’s probably another alternate universe out there that has played Abzû first and Journey second, and therefore liking Abzû better, but it’s the other way around over here.

Abzû is a game created by Giant Squid and published by 505 Games. The creative director was the art director for Journey and both games have a soundtrack made by the great Austin Wintory. The art style, music and silent, visually abstract way that the story is told is also very similar between both games, so comparisons are inevitable. You could easily fool me and say that both games take place in the same universe. Of course, all of these comparisons are a massive compliment to Abzû, but it would’ve been great if the game had done more to distinguish itself from its predecessor.

When first loading up the game, you start to move around without much getting in the way. Aside from telling you the basic controls at the start, the game let’s you roam free and explore all you want. In terms of gameplay, it’s just moving around and interacting with a few things through a very Journey-esque chirp button. There’s no fighting or fast action scenes of any kind, so expect one of the most chilled-out experiences out there. Any kind of opposition or antagonist is found very close to the end of this 1-2 hour experience, and even then it is pretty easy to avoid. There’s certainly no risk of death to be found here at all, unless you are deliberately going out of your way to look for it. 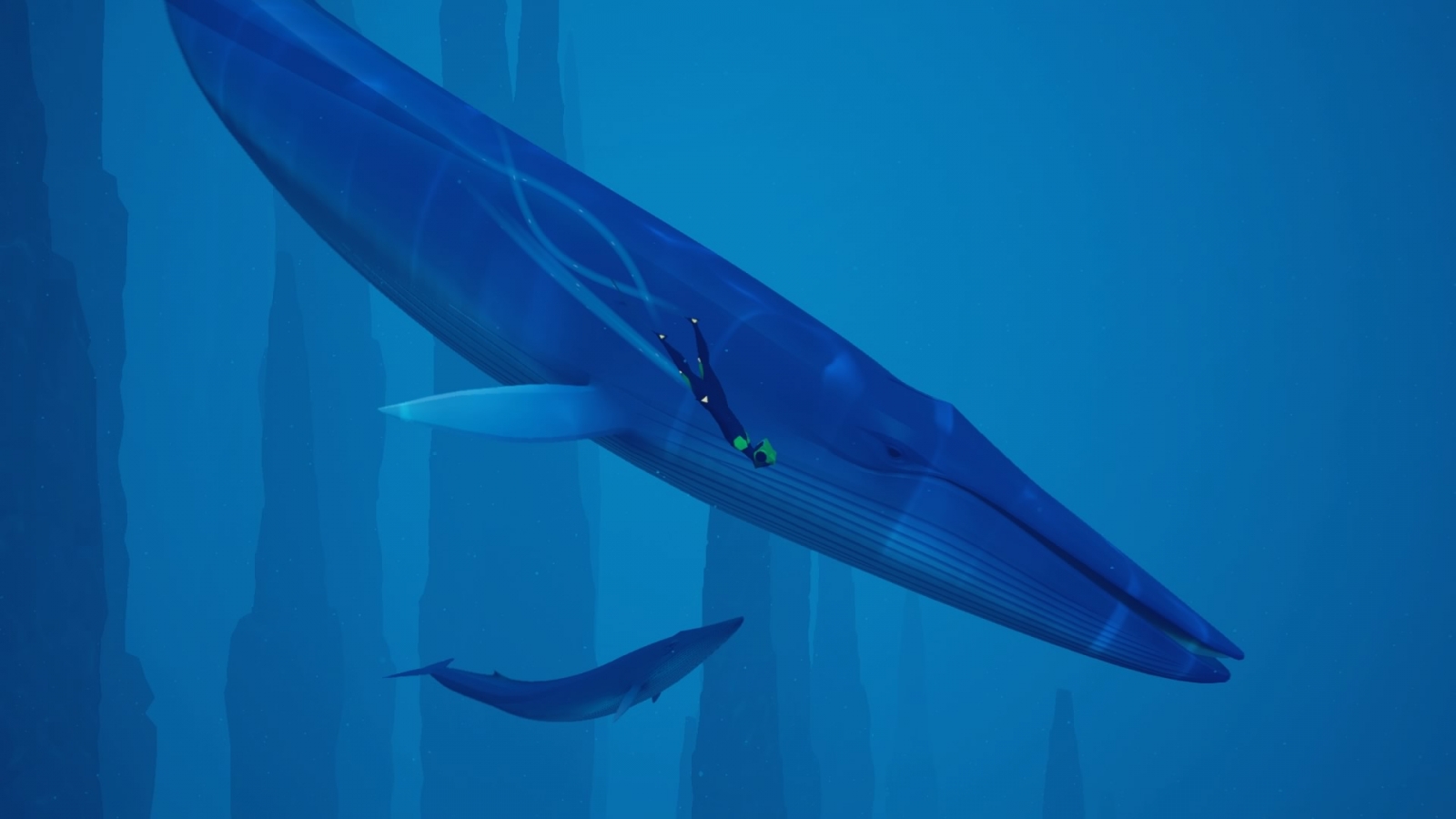 A Good Water Level For Once

After going through the motions and having your jaw drop over the visual elements, the game is over before you know it. Just like in Journey, you follow the same story beats like a fast-moving segment, observing drawings on walls and defeating some vague opposing force of an evil-looking color. After beating the game, you can jump to specific chapters and explore all you want, but there isn’t much there after going through it the first time. Sure, you have trophies that you can unlock for certain milestones and finding hidden items, but there really isn’t anything propelling me to do so.

One of the things that I certainly would not have minded to see Abzû borrow from Journey was its online elements. In Journey, you could be randomly placed with another player, re-contextualizing the solitary adventure into one that you share with another. One of the biggest reasons for why people loved Journey so much was due to this feature. Abzû unfortunately doesn’t have that, which I think could’ve benefited the game greatly. The one thing that I would’ve liked to see get carried over is not here, which can be upsetting for some people. 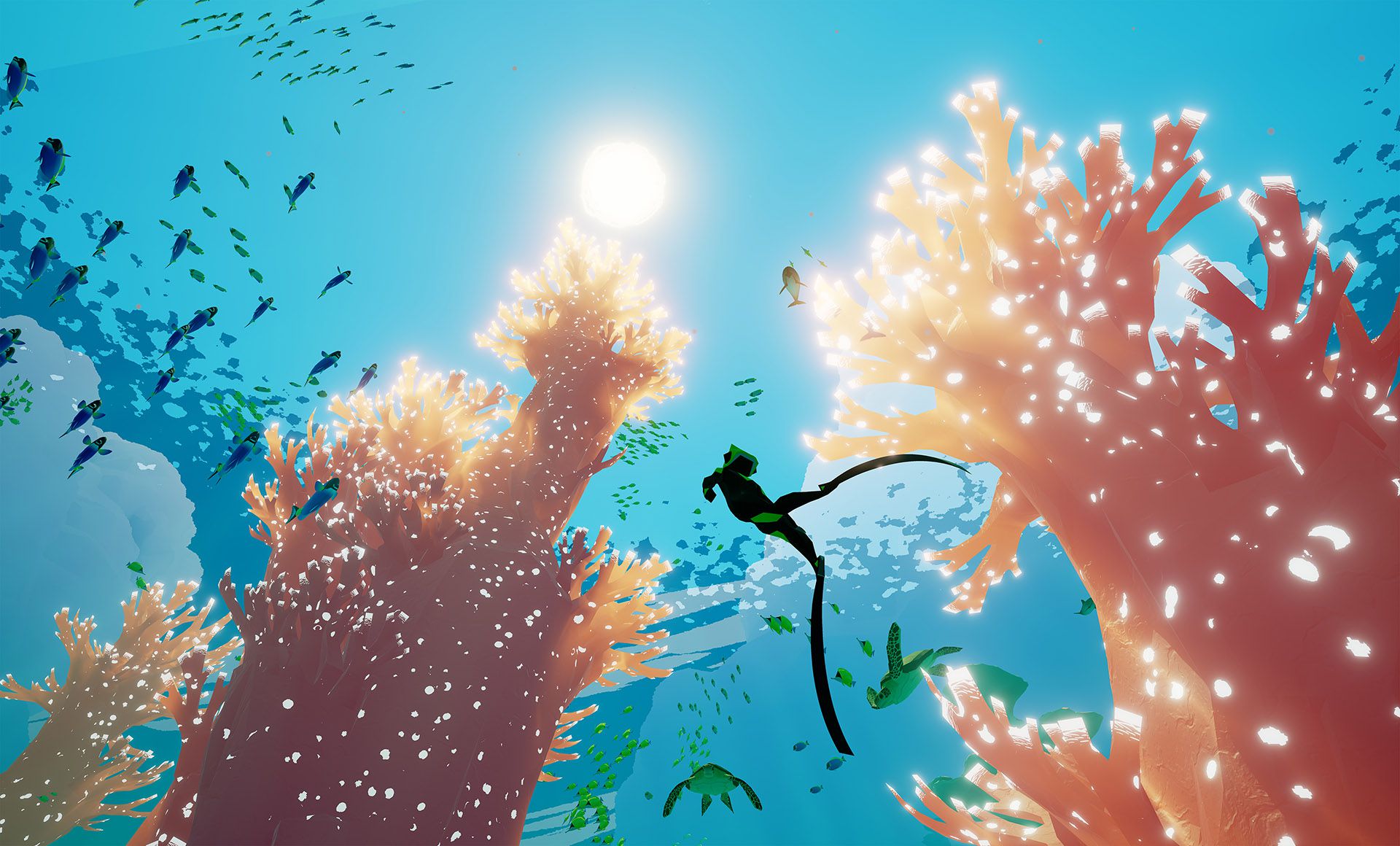 This is certainly not a game for speedrunners. It is very clear that the biggest amount of enjoyment one can get is from exploring the ocean and taking in all the sites. Taking your time and seeing the beautiful animation flow while immersing yourself in the color and sound of the world you’re in is arguably the right way to play. There are even meditation spots where you can simply observe fish and possibly use it as as cool thing to leave in the background during a fancy party. I think it is an understatement to say that the visuals are incredible, almost reminding me of Discovery Channel documentaries or the show Planet Earth. The music is no joke either; though nowhere near as good as Journey‘s, but still pretty damn compelling.

I say the game is very similar to Journey, but I actually saw a ton of similarities to Flower as well. The vast amounts of colored fish swimming around reminded me a lot of the flower petals flowing in the wind, except now I’m underwater and giving life to a totally different area. Even the ending of the game, in execution, is very reminiscent of Flower, which is fine, but that is yet another game that Abzû will be constantly compared to. At the end of the day, if you’ve already played Journey, then there isn’t much for me to say about Abzû. Both games are essentially the same, holding similar music, visuals and even story, but now set in a different location. If you loved your solitary and emotional adventure across the desert, then you’ll most likely love the ocean diving equivalent of that. Abzû is a really good game, but it provides too little that’s new in order to escape the shadow of its older half brother.